Filed in: Funnies, I don't cook

I started meal planning and of course, all my meals are being found on Pinterest. So naturally, there’s already a heightened level of anxiety because Pinterest food, is food blogger food. Every recipe appears to be made with ease and there’s professional pictures each step of the way to show how you too can do this recipe. I don’t even read the blogs, I just scroll, scroll, oh, pretty picture, scroll…here’s the ingredients. I make my list and I don’t check it, errors can and will occur.

There’s been some recent meal successes, found on Pinterest. I normally know what I’m capable of, but today I completely misjudged my abilities.

For recipes that required a food processor, I’d been using my ten year old Ninja blender, which sounds like it’s about to die. Watching it “blend” has been quite frustrating as all the things would just hang out on the sides of the blender and not actually see the blade, which has been put in the dishwasher at least 1,000 times and is no longer sharp.

I told Rob, “I need a food processor.” Our Sunday errand had been established.

Reagan eats a lot of veggie burgers and I thought, I could probably make her some from scratch. I opted for this recipe as my second veggie burger to try, my first one was a roaring success. I started around 4 p.m. I wish I had set a timer to know how long it actually took. In full disclosure, the recipe says it takes 90 minutes, due to prepping, cooking, whatever. Like I mentioned, I don’t read every step and this took way longer. 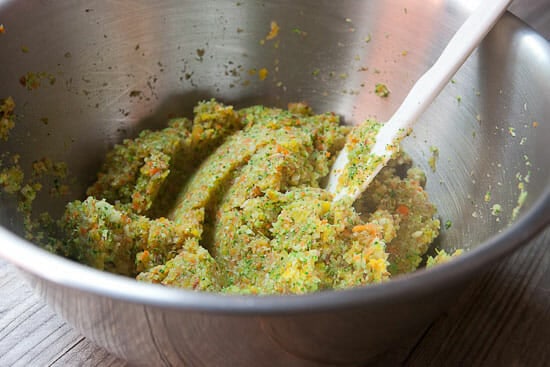 First problem at Publix, they don’t have golden beets. I never knew they even came in that color, I also didn’t think anything of it that they were on my list. So I’m deciding, is there anything that could be substituted? Could its cousin beet, RED be brought in to pinch hit? Rob googles that they’re basically the same so we forge on.

It also called for carrots, but I had shredded carrots and I thought, so much easier. I eyeballed the amount…all clues to problems ahead.

Since I used red beets, my mixture looked nothing like the above beautiful picture, it was just red, with a side of red. I promise I included the other ingredients but the beets wanted all the credit.

The recipe said it would only take 15-20 minutes to get the right consistency in the freezer so you could start frying them up. The recipe is clear, you don’t want them frozen, just “pretty cold and solid” also known as frozen. We never got the cold and solid, but not frozen consistency.

Another reason I’m not a food blogger…progress pictures. They don’t exist. Here are our photos at the end, we’re just trying to go to bed.

Let me explain what you’re looking at. A dark, bright and frozen ingredient mixture. You’re basically looking at frozen beets. The consistency is way off; we had to completely freeze them so they didn’t fall apart when it was time to bread them. We wanted them to be in the shape of hearts since they’re so red, but our heart cookie cutter was more trouble than it was worth. Instead we used a serious spatula to slice and pry the frozen beet burgers out of the pan. Not going to lie, these look terrifying.

We dubbed these Santa Burgers, since Reagan loves Santa. They actually taste great, even though they look the opposite of that. Reagan ate three and asked for more, probably because it’s what Santa eats when he’s figuring out what toys to dish out. In the end, it was a success, only due to her eating them. If she pushed them away I would be crying.